Hello! You've found my page of miscellaneous Harry Potter quizzes - lucky you! As you will find out I'm nothing if not consistent. I hope that you will enjoy these as much as I have but be forwarned; some of these quizzes contain adult content and language and may not be appropriate for innocent young children (or adults for that matter) or bible thumpers. That said, on with the sorting!

I'm a Ravenclaw!
"Here in wise old Ravenclaw,
if you've a ready mind,
Those of wit and learning
will always find their kind."

Ravenclaw! Some might see you as a bit haughty, but that's just because they lack the intellectual capacity to be worthy of your presence. You see little difference between enlightenment and entertainment; learning experiences are tremendously enjoyable for you. And remember, kids: just because you're brilliant doesn't mean you're studious!

A More Unique Hogwarts Sorting Quiz
brought to you by Quizilla

I'm from Ravenclaw!
Hogwart's Sorting Hat Quiz
made by The Genki Gang

You are a RAVENCLAW! As a Ravenclaw and as an NFP, you value imagination, ideas and intelligence. You are probably somewhat of an individualist and avoid conforming just for its own sake. You are insightful and perceptive, and since you are empathetic and value harmony, you usually try to avoid conflict. Of course, you may enjoy participating in heated debates but only as long as they remain on an intellectual level and not a personal level. In general, you are open-minded and curious, and set high standards for yourself.


Hogwarts Sorting Hat: Based on Myers-Briggs Personality Typing
brought to you by Quizilla

Abuser of Sarcasm (Because you so didn't see this coming.)


What Type of Slytherin Are You?
brought to you by Quizilla

Professor Lupin, Defence Against the Dark Arts
Harry Potter Quiz: Which Hogwarts Professor Are You?
brought to you by Quizilla

Professor Lupin - Defense Against the Dark Arts
Harry Potter: Which Hogwarts professor would you be?
brought to you by Quizilla

Which Harry Potter Marauder Are You?

Which HP Kid Are You?

Harry Potter: Which Member of the Rescue Mission Are You? (with all new pics!)
brought to you by Quizilla

...and which lesser Harry Potter character are you?

The HP Family Quiz
made by Sapphire.

Which Harry Potter Pet Are You?
brought to you by Quizilla

Harry Potter: Fantastic Beasts and Which One Are You?
brought to you by Quizilla

If you're under 17 or just plain prudish, turn back now!

The HP Male Marriage Quiz
made by Sapphire.

The Weasley Boy Marriage Quiz
made by Sapphire.

Sirius Black
Who is your ideal Harry Potter man?
brought to you by Quizilla

Which Harry Potter Male Are You Most Sexually Compatible?
brought to you by Quizilla

(Because he's such a Byronic hero!) 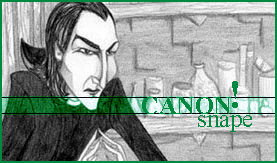 You are Canon!Snape- surly, greasy and unrivaled president of the 'We Hate Potter' club. You favour the Slytherins and think Gryffindors are a bunch of blathering idiots. You are absolutely right. *cough* You are also as mysterious as you are acerbic. You spend most of your time not shagging Sirius Black and not lusting [illegally] after your students. Instead, you lust after the DADA Professorship in between threatening other Professors and getting bitten by three-headed dogs. You are most likely to go down in history for making the largest number of petitions for Harry's expulsion at Hogwarts staff meetings.

Which Snape are You? by Marett Graves
With artwork by Laura Freeman

You are a Conservative Snapeist. Like the Orthodox Snapeist, you acknowledge that Snape often behaves pretty badly in the books, but you prefer to focus on the mitigating factors, and the fact that Harry doesn't entirely understand what he's observing. You may write/read stories exploring Snape's return to Dumbledore, and the redeeming sacrifices he's made to protect Harry and the wizarding world in general. Hey, the guy's been through a lot -- cut him a little slack!

What kind of Snapeist Are You?

You know your Professor very well. You are more than just acquainted, you are close friends. To you he is not Professor Snape, he is Severus!

Do you know Severus Snape?

You're perfect for Severus! You two are like two halves of orange! If you meet him, you'll spend your quiet and dark life in dungeons, making poisons,and...

Have you got any chances for a relationship with Snape?